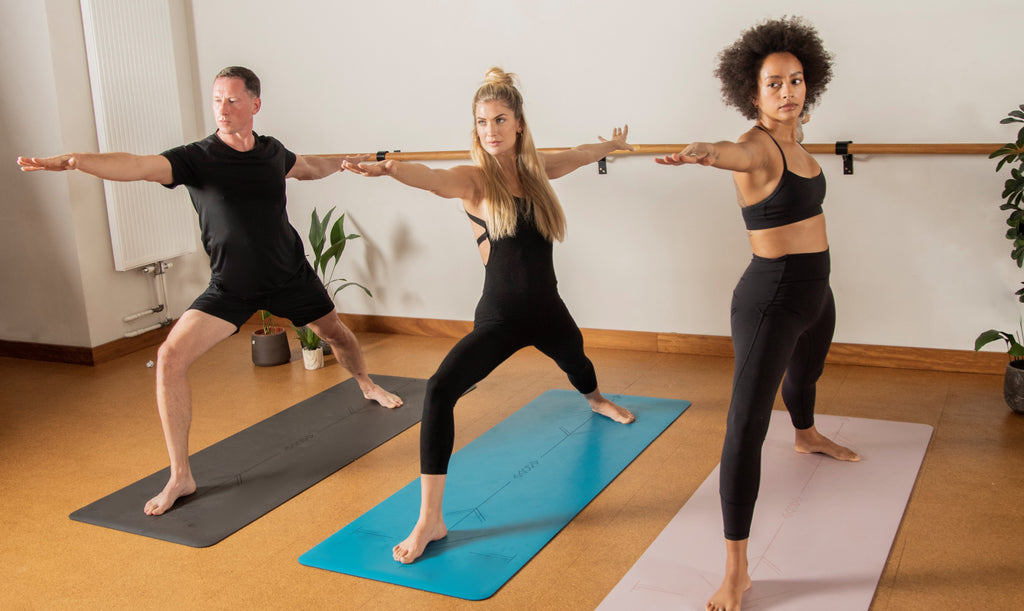 The 5 Warrior Poses of Yoga

In Indian yogic tradition, the five poses of the warriors are called the Virabhadrasana series or the Vira poses. They are all standing poses that are usually sequenced together and are often included in vinyasa style classes and modified sun salutations.

These poses are named after the legendary warrior Virbhadra, who was created by the god Shiva. This challenging set of yoga poses stretch and strengthen our bodies, hearts and minds. The Virabhadrasana series is yoga’s most popular—and perhaps most useful—group of postures.

What are the yoga warrior poses?

Known in Sanskrit as Virabhadrasana, Vira means “hero” and Bhadra translates as “blessing,” “auspicious” or “friend.” In this context, asana translates as “posture”. Thus, Virabhadrasanas can be called auspicious heroic postures. The warrior poses are all standing poses with a wide stance and outstretched arms. They are usually sequenced together, but they can also be done individually.

As with all gods and goddesses, there is a powerful ancient story behind Shiva’s creation of the warrior Virabhadra. While some details change depending on the version, much of the story remains the same. Shiva was married to Sati. However, her father, Daksha, did not approve of their union. He refused to invite either of them to a huge sacrificial festival he held, which prompted a hurt Sati to confront him. Her father humiliated her, asking if she was leaving her “wild animal of a husband.” In sadness and shame, Sati chose to kill herself. The specific means of how varies, such as throwing herself into the fires or meditating until she burst into flames.

Shiva was devastated and then furious upon learning his wife’s fate. In his anger, he ripped a dreadlock from his head and threw it to the ground. From the hair sprang Virabhadra, a massive creature with three eyes, a thousand arms, and a garland of skulls. He went to the festival to slaughter everybody, including the gods. When it was over, Shiva was remorseful for the destruction he created and his anger turns to compassion. He restores the lives of Daksha and the gods.

Why practice the Warrior poses?

The moral of Virabhadra’s mythological story is that it is best to transcend our anger, fear, hurt and insecurity by activating our strength, power, courage and devotion. When we move into these Warrior shapes, we embody the auspicious and heroic energy of a warrior. As we hold and breathe in these asanas, we connect to our strength, confidence, compassion and power. Each warrior posture has its own powers that can help yoga students in their journey of inner and outer transformation.

These poses can be difficult for some, as most have the front leg bent 90 degrees at the knee, which requires a lot of lower body strength. However, these warriors are some of the most common shapes you’ll encounter in a yoga sequences so it is important to learn their correct alignment to prevent injury. Routinely practicing them brings many powerful benefits.

The Physical, Mental, and Emotional Benefits of the Warrior Poses

Physically, this asana works to strengthen your lower body, especially your hamstrings, feet, ankles, glutes, and quadriceps. It also builds core strength by having the spine long and the chest lifted. This mild backbend opens the front body and stretches the quads, hip flexors, and psoas.

Mentally, it promotes focus, concentration and body awareness. This warrior challenges one to stay grounded and present while engaging multiple muscle groups to hold this shape.

On an emotional level, Warrior I is a fiery pose of bravery, celebration and virtue. It encourages a heart full of compassion and courage to conquer life’s challenges and our inner demons of ego and anger.

This asana strengthens your body’s quads, adductors of the inner thighs, hamstrings and core muscles, as well as your arms, shoulders, hips, and glutes. It also stretches your hips and groin. This warrior promotes strength, endurance, and stability.

This asana challenges us to find ease within effort and builds mental stamina, inner strength and concentration.

With practice, this asana will develop the courage and power to stare down your battles with ease and grace. It will also allow you to see your challenges clearly with discernment.

This balancing Warrior creates muscular stability as you engage your core and stabilizer muscles, hamstrings, gluteus, and spine. It also strengthens the shoulders, hamstrings, calves, and ankles.

This challenging pose strengthens your focus, concentration, and mindfulness. As you balance all your weight on one foot, you discover how to remain calm and cool under stress and pressure. Overall, it encourages poise, balance, grace and grit.

This warrior teaches us how to transform our biggest challenges and struggles into strengths and triumphs. Learning to balance on one foot requires inner strength, faith, courage and humility.

Also known as Crescent Pose or Proud Warrior, this asana deeply stretches the side body, as well as the hips, spine, chest, and inner thighs. It strengthens your abdominals, intercostal muscles, neck, arms, and the psoas.

This side bending pose is also known as the Peaceful Warrior as it calms your mind by increasing the flow of prana and blood and releases tension in the upper body.

Emotionally and mentally, Reverse Warrior is a great way to add strength, power, perseverance, self-esteem, and beauty to your daily practice. It also promotes your ability to flow through life’s challenges with ease and grace.

Also known as Devotional or Bound Warrior, this asana is considered one of the most challenging Warriors for many yoga practitioners. The pose tones and strengthens your hamstrings, quadriceps, calves, abdomen, glutes and back while stretching and opening your shoulders, chest, arms and hips.

On a mental level, it builds body-mind awareness and creates a sense of introspection and groundedness.

Emotionally, this asana encourages vulnerability, humility, acceptance and a sense of surrender to a higher power. Bowing deeply towards the earth supports the surrender of pride, judgements and expectations.

How to Do Lotus Pose (Padmasana) in Yoga

Get Away from the Worries of Life – 6 Yoga Poses for Depression and Anxiety
October 11, 2021

Previous Post
How to Do Lotus Pose (Padmasana) in Yoga
Close